January tends to be the month around here when I get some DIY stuff done around the house. I’m usually on holidays with the kids, and Stephen has a bit of time off too.

This year I had a large list of tasks I wanted to work on, but for some reason I decided to pick something new instead. (Yep, isn’t that how we all do DIY?) 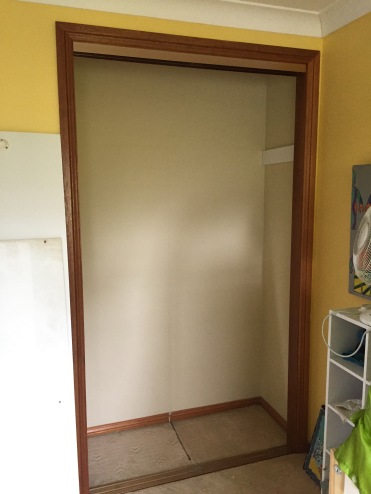 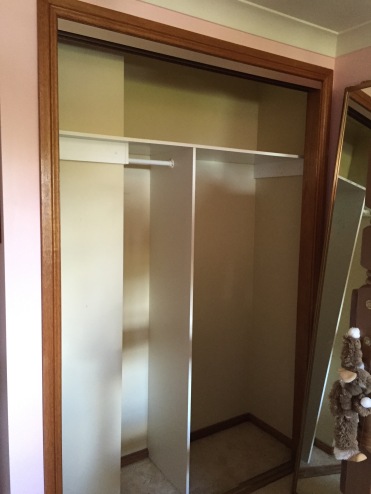 The kids have rather useless built-in wardrobes in their bedrooms. Each has a shelf just above head height, with a single rail for hanging clothes, and a rather annoying partition. (I’ve removed these in one picture above).

This might be okay for a grown-up with shirts and dresses to hang (although my own experience says “not!”), but the little kids can’t reach the rail, and the space is largely wasted.

I had enough of this wretched cupboard and decided to upgrade it at last! First I whipped out the shelf and hanging pole, leaving behind the shelf supports on the wall.

At this point, I discovered the carpet was cut up the middle, and didn’t look so good. It wasn’t attached to the floor at all, so I looked underneath. 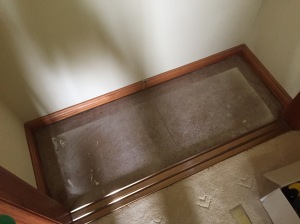 The floor is unfinished, and looks pretty shabby. Maybe a bit of paint would look good?? 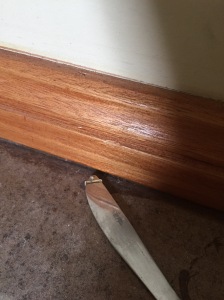 First I had to remove a few (did I say a few? MANY!) staples. I have no idea what the staples were for. Anyone in the building industry want to enlighten me? Bizarre. 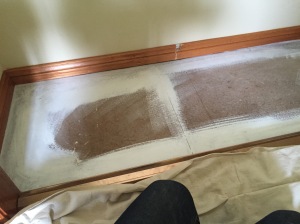 Then I slapped down a coat of water-based primer. I wanted it to be quick to dry and not smell to high heaven in my kids bedroom!

At the same time I patched some holes in the wall and put a dab of primer over them, and over the melamine shelf supports (so that the coloured paint would actually stick).

Then it was time for some leftover wall paint to go on: 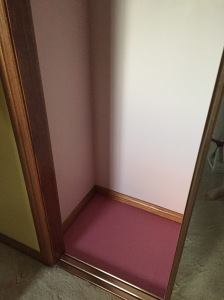 I chose pink because Evie loooooves pink and had just moved into William’s blue-yellow room. Pink inside the wardrobe is a nice little touch to help it make it more “her room” too. I think the floor looks awesome!

A few days later, Stephen and I installed some Ikea bits and pieces to replace the old shelf and rail. There was a wee bit of cursing for this bit, but we got there in the end. ;-P 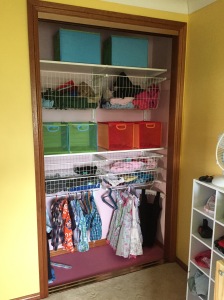 It’s so cheerful! Now the kids can get themselves dressed if they want (yeah right!) and there is plenty of space to store out of season clothes. I immediately made plans to do over Isobel’s wardrobe too, in a much more teenage colour …