“Simple Living” is a strange description for what we do. Each task in my day is broken up into many small parts, each of which is simple in and of itself, but the whole is typically a complex dance, sometimes shrouded in mystery. 🙂

Take tonight’s dinner, for example: I decided to try a new recipe I came across whilst researching healthy lunchbox options that don’t involve bread. Impossible Quiche Recipe. I was drawn to the “impossible”, and stayed for the easy-to-make part. What got me hooked was I had a bunch of leftover zucchini still on the bench. Maybe the kids will eat it! >.>

The recipe calls for “1 zucchini” which is a little woolly for me, since our zucchinis come super sized (Costa Romanesco variety). This one has been sitting on the bench since we picked it, maybe two weeks ago? I’ve lost track. This is the last bit left from our plants which have succumbed to Powdery Mildew (the fate of all Cucurbits in Sydney Summertime). We have more baby plants in, but it will be a while before we get more fruits. I figured this would be the equivalent of a large zucchini. Easy peasy.

I had no onion left, so I needed to find an alternative if possible. Solution: some smalls leeks now going to seed in the garden! These never got as big as a typical supermarket leek, maybe because of a lack of water, or inattention on my part. Regardless, the plants have all decided at once that they’ve had enough, and are starting to put up a little flowerhead that will grow into a great big showy beautiful flower: 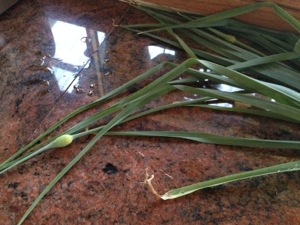 If I leave them for much longer, the leek will become woody in the centre, but they are just fine when the flowerhead is still small like this. So, I grabbed two and ducked back inside.

I used the butter in the recipe to sauté the leeks, and added the mushrooms too, to bring up the flavours a little. I had no bacon to use, so the mushrooms are going to do the job of the meat, in terms of flavours. Then I used the oldest of the eggs in my basket and proceeded to assemble the quiche.

The basil in the recipe was a nice fragrant touch. I used some leaves off the plant I have growing in a jar on my bench. Believe it or not, this basil came as a cut herb in a polybox from my organic veggie supplier. All I did was put it in the mason jar to freshen the leaves. That was the day before Christmas Eve! It has since rooted, and is flowering quite happily in my kitchen. Talk about convenient! 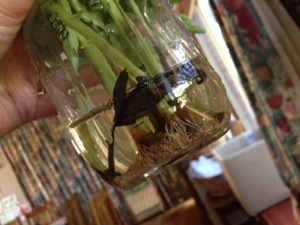 Roots sprouting in the jar water

I prepare my quiche dish in the same way as I do for other baked goods: with a bit of butter rubbed on, and then dusted in flour. I hate the stink that the spray oil makes (it makes me cough too) and it leaves a sticky residue when it bakes. So now I do it the old fashioned way, and avoid using disposable baking paper too. 🙂 Isn’t it a beautiful quiche dish? I was given it by my mother-in-law and it has made a lot of quiches in its time.

Once the quiche was in the oven I cleaned up a huge pile of tiny new potatoes we had sitting in the bench covered in a tea towel. They will start turning green and going soft if I let them sit too long, so it’s potato salad time! I also put the tops of the leeks into the freezer, so it can be made up into vegetable stock at a later date. I keep a box in there to catch scraps like leeks, celery leaves and stumps of carrots. These make great stock! 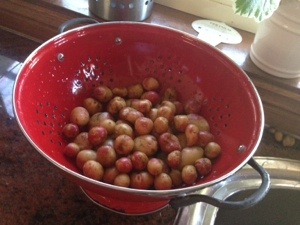 All in all, it took a long time to prepare the dinner, but it was pleasant time working quietly without interruptions. The kids were resting quietly, there was a nice breeze coming in the kitchen window, and I was making it up as I went! It’s surprising how much enjoyment I can get by doing something myself, varying a recipe here and there, and knowing that the ingredients I’m chopping have come from my garden, from our own hard work, from seeds we planted, and from weeks and weeks ago! 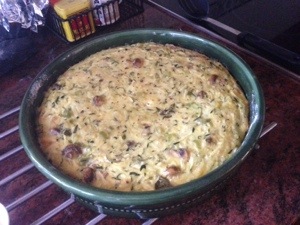